New Orleans is a melting pot of ethnicity, cuisine, architecture, and partying. There’s nowhere else like it and everyone is welcome.

Mardi Gras is paid for and organized by the community. Why? Because they can.

Cafe Du Monde is open 24 hours, 7 days a week, but almost always has a line.

Traveling Gingerbread Note: Before leaving New Orleans, we indulged in one more order of beignets from Cafe Beignet. Located in the Shops at Jax Brewery in the French Quarter, 1 of 4 locations, the cafe has live music every day from 2:00pm – 10:00pm. There are 3 beignets in an order for $3.99 USD+tax.

King cake is only eaten from January 6th, at the Feast of Epiphany, until Mardi Gras Day.

Traveling Gingerbread Tip: A praline is a confection, with a texture similar to fudge, made from butter, brown sugar, and pecans. Free samples are easy to find throughout the French Quarter in souvenir stores, gift shops, and candy stores.

A guide is required to visit cemeteries due to past vandalism and bone theft. 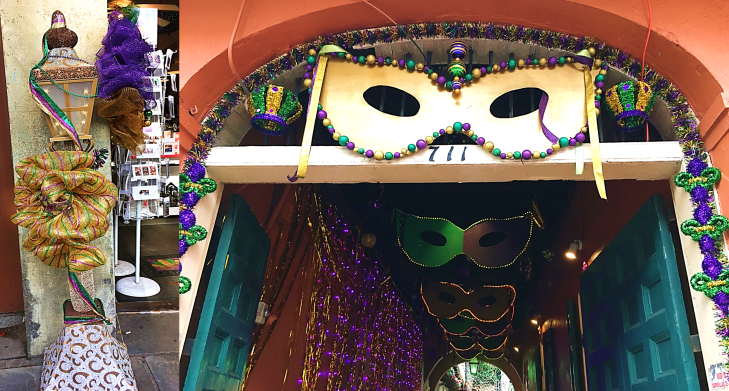 Traveling Gingerbread Note: Research prior to our trip resulted in us adding Decatur Street and Frenchmen Street to our list. We found the areas to be artsy with voodoo shops and dive bars, but overall uncomfortable. There was less foot traffic, many homeless on the sidewalks, and dark, uninviting bars with covered windows along both streets even during the day.

The Port of South Louisiana is one of the busiest cargo ports in the United States.

Traveling Gingerbread Note: New Orleans is actually 100 miles from the Gulf of Mexico.

Some of our favorite hidden gems:

Museums educate visitors on much more than art.

Hollywood has created a dark, misconception of voodoo.

Traveling Gingerbread Note: For a taste of Mardi Gras with more manageable crowds we recommend visiting on a weekend between January 6th and Fat Tuesday. Visiting January 18th-21st, we unknowingly arrived during Pardi-Gras, a 5 day celebration with live music, beads, and celebrating on Bourbon Street. The city was decorated in purple, green, and yellow, we received free slices of king cake, and witnessed a second line parade.