Check wait times for rides and restaurants from a mobile phone.

Download the Universal Studios Official Resort app to a mobile phone to check park hours, directions, notifications, special offers, and your location on the park map. Save rides, restaurants, and events as favorites to quickly check wait times.

Make Harry Potter and the Escape from Gringotts your first line of the day.

We began monitoring the opening of Harry Potter and the Escape from Gringotts in the Universal Studios app upon entering the park. As soon as the crowd began to move inside, we joined the line and only had a 25 minute wait. Checking the app later in the day wait times were as long as 70 minutes.

Be at the park at when it opens. Most days opening time is 9:00am.

We arrived around 8:45am and were among the first rush of visitors into Universal Studios. The park was significantly more crowded in the afternoon. There were also more adults later in the day creating longer lines for alcoholic beverages.

Climb aboard the Hogwarts Express from both King’s Cross Station and Hogsmeade Station for the full experience.

A Park to Park Admission Pass is required to ride the Hogwarts Express. The views out the train window are different in each direction. Waiting in line at King’s Cross Station in Universal Studios, there is a quick optical illusion where people slightly ahead of us in line entered Platform 9 3/4. Nearing the stacks of luggage, have your camera ready. 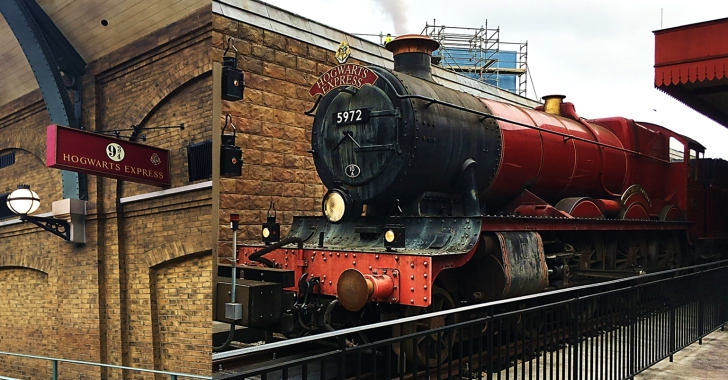 Skip the Butterbeer (unless you love butterscotch) and order a Dragon Scale or Wizard Brew.

All bags are required to be placed in a locker before riding.

There is a separate line for lockers, increasing wait times for rides. If it’s possible, avoid bringing a bag into the park to bypass the locker line, including cross-body bags, drawstring bags, and small shoulder bags. This was another time Mitch’s cargo pocket shorts saved the day.

The Dragon in Diagon Alley breathes fire every 10 minutes.

The burst of flames only lasts about 5 seconds, so it is easy to miss, but you won’t miss the dragon’s echoing roar or blast of heat accompanying the fire. Wait 10 minutes and have your camera ready for the next fire show.

Looking for the restrooms in Diagon Alley, we walked down a dark alleyway to find Knockturn Alley. Skeletons, potions, and death eaters can be found throughout Potions for all Afflictions, Borgin and Burkes, and Markus Scarrs Indelible Tattoos.

In our opinion, Diagon Alley is more impressive than Hogsmeade.

The snow capped buildings and Hogwarts castle are authentic, but Diagon Alley has a lot more to do. Closed signs hang in the windows of most Hogsmeade storefronts, unlike Diagon Alley, where visitors can enter Weasleys’ Wizard Wheezes, Gringotts Money Exchange (ask the Gringotts Goblin if he is a house elf), Quidditch Supplies, Scribbulus, and many more. If only one park is in your time frame and budget, we recommend Universal Studios over Island of Adventure.

The entrance to Diagon Alley is awesome.

Strolling down the streets of London, we walk by a record store, Wyndham’s, a train station, a telephone booth…but where is Diagon Alley? Following a steady stream of people behind an unmarked, brick wall, we emerge into the Wizarding World.

Re-entry to the parks is permitted while your ticket is valid. During entry to the first park your fingerprint is scanned and associated with your ticket. From that point forward, both fingerprint and ticket are scanned upon re-entry or when accessing a new park on a park to park pass.