90 minutes of flashy robots, sea animals, bouncing parrots, mermaids, tribal dancers, and colorful lights. If you want to experience the unique side of Tokyo, the Robot Show is just what you are looking for.

1. Purchase tickets in advance. We purchased tickets for the 7:30pm Tokyo Robot Evening Cabaret Show at the Robot Restaurant months in advance. There are 3 shows a day and tickets sell out fast! Instructions state attendees must be present at least 30 minutes prior to the show time or no admittance. We arrived only a couple of minutes before showtime, quickly received our tickets, and were still able to enjoy the preshow.

Traveling Gingerbread Note: If taking the metro, head to Shinjuku station and exit through the East gate. Walk straight and look for an enormous white sign with colorful letters on the left: Robot Restaurant 20M with an arrow pointing straight ahead.

2. Arrive early enough to enjoy the preshow lounge. After receiving our tickets, we were directed across the street to a flashy pre-show lounge for a musical robot performance. Drinks and food were available during the show at an additional cost, but with so many restaurants in Tokyo we recommend grabbing dinner before. After the performance, there was a photo opportunity with the stars. Promptly at 7:30pm everyone was directed to a different, but equally gaudy staircase leading to the robot show.

3. The front row is very close to the show. The crew warned guests seated in the front row the show will be very close. All drinks must be placed in the recessed cup holders and all objects must be removed from the small table during each act. Together we practiced leaning back as the crew walked by with outstretched arms. They weren’t exaggerating! More than once we leaned back to avoid being brushed by an oncoming float, robot, or performer. The rectangular room had 3 tiers of seating on opposite sides of the stage. When the stage was empty between acts, we enjoyed seeing the audiences’ faces reflecting what they just experienced.

4. Wave that glow stick! Waving a glow stick continuously was tiring, but the minute Stephanie set down her wand of light she was embarrassed by a giant bouncing parrot who stopped mid show and handed it to her. There were opportunities throughout the show for volunteers from the audience to participate on stage for those that wanted more. 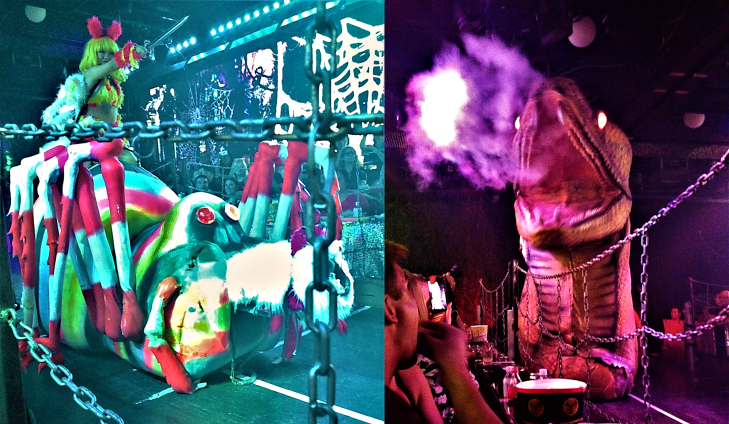 5. Leaving your seat in the middle of an act is prohibited. Overpriced popcorn, bento boxes, beer, and water are for sale between acts. Minutes before the show begins, the extremely narrow aisles are closed with chains. Anyone not seated must when the aisles are closed must wait outside until the act is finished to return.

6. The second act is crazier than the first. The crew installed a chain link fence between the audience and stage before the second act began. Unrelated to the first act, a story was projected onto the wall of sea animals living a joyful, peaceful life until evil, robot aliens invaded. The video ended and the room went dark. Suddenly sharks, crabs, lobsters, clown fish, and other aquatic creatures emerged on stage to battle alien, robot intruders. When the last wounded sea animal scampered off stage, the chain link fence was removed.

7. There are more than just robots. There are robots, but also many more components to the show. In the third act, we were serenaded by singers on floats corresponding with their outrageous attire, entertained by dancers in black body suites adorned with strings of lights performing to a Michael Jackson mash-up, transfixed by tribal dancers, confused by singing fish, and dumfounded by other strange performances. Just abruptly as the madness began, it ended, and the show was over.

8. We absolutely recommend the Robot Restaurant! Keep an opened mind and enjoy the show. Some of the crew were dressed in black walking behind the floats and animals with a remote control. Costumes, robots, and floats do show some wear with 3 shows a day. We were confused and many scenes were unrelated but, we were entertained and we laughed the entire time. Before booking the show, we read many reviews and watched Anthony Bourdain’s reaction in Parts Unknown. Leaving the showroom, we both agreed there are no words to describe what took place during those 90 minutes. It’s a Tokyo must see, sensory overload, experience!